A Brief History of Outwell

Outwell has a very long and interesting history. In the great Domesday Book of 1085 Outwell is recorded by the name of Utwella and Wtwella. The Parish was in the custody of William de Warenne. The book's survey also records 16 borders with lands worth 5s which were noted as belonging to Saint Benedict's Abbey in Ramsey. It is thought that the name Outwell is derived from the Old English and derives from the fact that it is a later settlement or extension of the nearby village of Upwell. It is also suggested that the village of Outwell was established during the Saxon period.

During the Middle Ages the River Nene determined the entail layout of Outwell. Since that time the landscape of the whole district has consequently been much altered by the constrcution of several large drains which run through the Parish. The village and parish is traversed with many drainage channels which characterize this part of Fenland Norfolk. The eastern corner of the parish is cut north to south by the Middle Level Main Drain. Crossing the parish from east to west is the drain called Well Creek. The north and eastern parts of the parish consist of arable and pasture fields, the eastern area referred to as Walsingham Fens and the north area as Well Moors. On the edges of the village there is a small amount of woodland near Birdbeck Field and to the south and at Church Field to the east of the village.

The history of the Hall begins with its family origins, a Norman from St. Omer who dwelled and, according to Christopher Hussey "christened his domain with gallic grace, among the dull-sounding names of the danes."[2]

The knight of St. Omer accompanied William the Conqueror's invasion of England; he "appears in the Roll of Battle Abbey, and his descendants lived here in their place of Beaupré."[2]

Several other noted members of the St. Omer family are Sir Hugh de St. Omer and John de St. Omer, who according to the chronographer Matthew Paris, were known to have 'penned a counterblast' to a monk of Peterborough who had lampooned the people of Norfolk during the reign of King John; which elevated them to literary fame.[2]

A Sir Thomas de St. Omer was keeper of the wardrobe to King Henry III. The Arms of his son a (fess between six cross-crosslets) appear on a monument that was formerly in the church at Mulbarton, Norfolk. Christian, his daughter and only heir, married John, the great-great-grandson of one Synulph, who lived during the reign of King Henry II, and had issue: John dicte quoque Beaupré,[3] who lived during the reign of King Edward II, and married Katherine, daughter of Osbert Mountfort. Their son Thomas Beaupré would be raised by his grandmother Christian (last of the St. Omer's) after the death of both of his parents. Thomas was knighted by King Edward III, and married Joan Holbeache, and died during the reign of King Richard II. Generations later the Hall was in possession of Edmonde Beaupré, Esq. After his death in 1567 leaving no male heirs, the hall succeeded to Sir Robert Bell, by virtue of marriage to Edmonde's daughter Dorothie in 1559; whereby his Beaupré line became extinct. [2]

Upon Sir Robert Bell's passing following the events of the Black Assize of Oxford, in 1577, the hall passed to his son Edmonde, and his heirs successively until finally in 1741, Beaupré Bell bequeathed the hall to his sister who married William Greaves, of Fulbourn.

Their daughter Jane brought it by marriage to the Townley family, who held Beaupré Hall until it passed into the hands of Mr. Edward Fordham Newling, and his brother. [2] 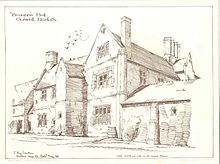 Phase I (1500–1530) Main construction of the Hall was carried out during the lives of Nicholas Beaupré and his wife Margaret Fodringey. A number of successive enlargements in the end consisted of over thirty interior rooms. The Hall, emerging from the South-West end, stretched North-East, with an additional wing branching out North-West, at an angle to make a chapel. These structures date from the early 16th century and had corners that were fortified with semi-Gothic spirelets, that were also added to later additions throughout the years. [2]

Phase II (1531–1570) A turreted gate house was added c. 1530, and placed in front of the entry facing South-East. This structure was built upon an old model, probably by Edmonde Beaupré during the time of his marriage with Margaret the daughter of Sir John Wiseman, servant to the 15th Earl of Oxford. His second wife, Katherine Wynter (widow of John Wynter of Great Yarmouth*)[4] was the daughter of Phillip Bedingfeld of Ditchingham Hall.

Phase III (1571–1577) After Edmonde Beaupre's death in 1567, the hall was enlarged by the Bells: new construction and renovations included:

Demolishing and rebuilding the body of east wing of the old house (where the living quarters were located).

Refitting the north-east section with porches on each side which had upper levels, and bays in front. From this section a large wing was added spanning south-east (demolished c. 1850), and a small wall was built connecting the wing to the north-east section of the gate house, which effectively enclosed the area to make a courtyard.

Around 1570, the south west end of the Gate House was fitted with a new building that connected a gated section of wall to the south-west wing, making another courtyard. This wing spanned north-west to the main block, and from the main block extended the chapel, which had an altarpiece in the far north-west end.

Phase IV (1577-1935) Aside from several rooms on the first floor and the main door which had 16th-century linenfold paneling, the Hall was variously altered internally by its successors (some negligent) from the 16th century. These alterations included a 17th-century fireplace, Georgian Wainscoting, and other 18th-century paneling. Despite further unfortunate alterations to the back of the Hall during the 19th century, by the early 20th century the Hall was not inhabited and what was left of the building was mostly a ruin.[5][6][2]

The Gate House was built around 1525, and was rebuilt and fortified until the time of Edmonde Bell.

The entry had four-centered arches connected to four towers built mostly of brick with stone dressings and upper caps made of ashlar. The second floor of the Gate House was a drawing room, lit by square-headed windows decorated with stone mullions and transom, and fitted with a fine Elizabethan fireplace, which had a marble frame and carved wood overmantel that enclosed the fireplace from the floor to the ceiling and had early Jacobean architecture style paneling with a pair of trimmed arches that were encased and separated by ornate columns, directly above the center of the marble arch frame. Each trimmed arch panel displayed a heraldic relief carving:

The Arms as they appeared on the left or north-west side of the mantelpiece featured the Arms borne by Bell. A Jacobean style pillar, separated this coat and arch from the other where appeared the quartered and impaled Arms of Beaupre: From the sinister top appear the quarters of Edmonde Beaupre/St. Omer-Fodringhay/ and Baulney Bottom: Dorewood-Coggeshall-and Harske.

The matrimonial landmarks of the family are recorded in beautiful heraldic glass panels that date from 1570. The Beaupré panels are slightly larger and older than the Bell panels; throughout the mantling is particularly fine.

The following coats occur and have been blazoned accordingly: [2]

During World War II, Beaupré Hall was used by the RAF. From this point, the Hall fell into a state of further disrepair until its demolition in 1966. During the 1950s, the grounds of the hall and the barrack huts that had been erected by the RAF were used to house students on the 'Holidays With Pay' scheme run by the government. In the book, The Bedside Companion for Ghosthunters by Ingrid Pitt, there is an account of a ghost seen by a couple of students who entered the Hall at night. Legends of headless horsemen and other spirits roaming the hall have also been reported.

Outwell was known for having a working Tramway running through the village. Today there are a couple of remnants still in existence from it's heyday, such as the old small depot building and the old route it used to take can be seen along the river and leading off to a farm. Its success was one of the reasons for the Light Railways Act 1896. Competition from motorised buses ended passenger services in 1927, but freight carried on until 1966 when it was cut as part of the Beeching Axe.

The Outwell depot office building as it stands today...

One of the old working trams in front of the Depot Office in Outwell, which still stands today! Image: www.lner.info/co/GER/wisbech/route.phpv

Originally the line used GER Class G15/LNER Class Y6 0-4-0T tram engines, which in accordance with Board of Trade regulations had sideplates and cowcatchers. These were replaced by more powerful 0-6-0T GER Class C53/LNER Class J70 and later by Drewry 0-6-0DM (Class 04) shunters. One coach survives.

It ran from the Cambridgeshire town of Wisbech to the Norfolk village of Upwell. Its route carried it close to farms and villages, allowing goods to be shipped into Wisbech where they could be transferred onto the main line and carried to destinations further afield. It was this agricultural trade that caused the line to be constructed in the first place, and what kept it afloat after passenger services ceased in 1927.

Motorists passing through Wisbech along Elm High Road near to the fire station may notice a small stretch of grass and trees, this would have been the canal between Wisbech (River Nene) and the Outwell Creek. The tram however finished off this section of the canal, though Outwell and Upwell still have some of their canals left.

The Rev. W. Awdry drew much inspiration from the tramway for stories in his Railway Series children's books. In the book Toby the Tram Engine the character Toby and his coach Henrietta are introduced, both of whom are based on stock used on the tramway.[1] Toby subsequently appeared in many more of the books and also became one of the main characters in the spin-off television series Thomas the Tank Engine and Friends.